Dear fellow traveler;
I’d like to share my Ladybug Lady story.
In the past, when I was married and lived a middle class lifestyle (more or less) I once spotted in a gift catalog beautiful small glass ladybugs and found myself magically drawn to order some. When they arrived they looked so adorable and precious that I decided to give them as good luck tokens to people.
Years later, when I lived in Garberville/HumboldtCounty, over two years time, I gave away about 400 glass ladybugs. That’s how I became “the Ladybug Lady” in town. I loved giving my shiny glass ladybugs to friends and strangers.
Especially I loved giving them to homeless people. They often rewarded me with the biggest smiles and a chance to look into the brightest eyes. To some I suggested to sell the blessed glass ladybug for a dollar and buy a hamburger. When I met them again and they told me that they had sold it for food I always gave them a replacement glass ladybug.

The glass ladybug ritual had become part of my life; I always carried a few with me in my purple pouch. I said “good luck to you” while placing it in a person’s open left hand. When they asked whether I made the glass ladybug myself, I said with a grin that I make them out of thin air, and we shared a good laugh. Sometimes I tell the person that I bless the glass ladybugs and that I keep them in a jaw on my altar.

Some symbolically spit on it as a gesture of claiming ownership of the glass ladybug and put it right away in their pocket; some put it in their wallet for the increase of cash flow. When I met the people in the street again, they often told me where they permanently placed the glass ladybug in their home; the bathroom mirror seemed to be the preferred place.
The cashiers often kept them right in front of them on top of the cashier drawer, for every customer to see and admire.

Quite often, when I met the same people in the small town again, my presence reminded them immediately of the glass ladybug and they wanted to tell me their ladybug story. Several men let me know that they passed the glass ladybug on to their wife, because “she loves ladybugs so much”.

One man told me that later that day when I gave him the glass ladybug he met with his wife to drive home together. When she got on the truck he right away welcomed her with the glass ladybug. At that very moment a live ladybug came flying in through the open window and landed on his wife’s hand — and they both were delighted!
I love hearing such stories and the shivers of goosebumps I get are confirming that there is much more going on behind what we perceive with our five senses.

Many times, when I saw somebody on the street side — or at the gas station — bent over the open hood of his car with a seeming problem, I walked over and asked whether he is in need of good luck, ready to place my glass ladybug in his greasy hand. And the surprised man lit up saying something like “that’s just what I needed”. (And I inwardly felt like a guardian angel.)

Everybody likes ladybugs. People often told me what a ladybug stands for in their family. A different ladybug story seems to run in every family, depending on where their ancestors came from.
Somebody told me that in their family it has been passed on that if a ladybug is held in the hand while making a wish, the direction that it flies away shows where your luck will come from.
Another person enlightened me that if a family member finds a ladybug in their house during the winter, it is considered a “good omen” for the coming year. Somebody else said if you catch a ladybug in your home, you must count the number of spots and that’s how many dollars you”ll soon find.
Many agreed that the sight of ladybugs is related to fair weather.

Sometimes we had a longer conversation and I told the ladybug legend as I learned it over the Internet:
“According to European folklore, ladybugs symbolize good luck. Back in medieval times, aphids invaded the fields of farmers. When the farmers prayed for help to the Virgin Mary, legend tells that huge swarms of little red beetles appeared. They proceeded to eat the aphids and save the crops. The farmers named the beetles “ladybugs” in appreciation of Mary, Our Lady.”

Being a German I loved sending glass ladybugs to my German family over the years. Ladybugs are considered luck bringers there as well. Mostly I sent them to my brother Jochen who was a taxi cub driver in Berlin. He passed them on to those of his special passengers who are in need of good luck.

Playing the Ladybug Lady helped me to overcoming my shyness. The glass ladybugs served me as icebreakers by putting me in the position to initiate a brief interaction with another human being.

I also saw them as a means of participating in the still ongoing underground movement of “Random Acts of Kindness and senseless Acts of Beauty.” No matter how little somebody may have in common with me, the person was willing to accept my gift and we had something lovable to focus upon for a brief moment in time.

One might think these little deeds of Unconditional Love are insignificant. Not, if you take on your Higher Self’s perspective. To me gifting glass ladybugs is a practice exercise of being a deliberate creator, to live in the now-moment and to focus on Well-being. I intentionally evoke a smile of surprise, appreciation, and joy from a fellow human. It is an exercise of “self- empowerment and empowering others”.

Over the years I have given away more than three-thousand glass ladybugs. Imagine three-thousand different ladybug stories, each one still expanding! Imagine how these powerful little symbols help to change and improve circumstances and events for the better in people’s lives. With every give-away I plant a seed — or open a vortex — for the increase of Love energy on Earth. For Love is the antidote of Fear. Glass ladybugs open hearts!

Alas, I ran out of glass ladybugs when I moved to Chico. I usually bought 100 at a time for $40, but couldn’t afford it anymore. Three times somebody donated me $40 to buy another ladybug shipment.

Having no more glass ladybugs saddened me, especially when I rode the bus, with so many opportunities of letting glass ladybugs open human hearts.
Then the company from where I bought them run out of business. They were made in China, but nowhere available anymore.

It is now October of 2020. A year ago I had moved to the small town of Oakridge, Oregon. I was thinking that I would love to revive the Ladybug Lady again. Yet the precious glass ladybugs are not available anymore.

I searched the Internet for 3D glass printers and contacted a 3D printing forum to inquire whether I could buy somewhere 3D-printed glass ladybugs in great numbers for pennies, so to speak. They told me that the technology isn’t advanced yet and I may check in again in a couple years.

However, I came across some tiny, life-size resin ladybugs. I also bought tiny wooden clothes pins and glued them on. I bought 500 of these cute, inexpensive ladybugs and gave them away right and left.

Several times, when I offered somebody a little resin ladybug on a clothes pin, they responded that they don’t want them for they could carry the virus.

So I stopped giving my ladybugs away. 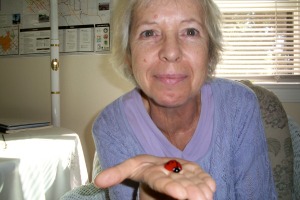 Dear Reader;
Do you appreciate the information on my website and benefited from it?
If you want to make a donation to support my work as a Lightworker I would greatly appreciate it.
As a senior without a family or support group I live below the poverty line. However, I am free to follow my life’s mission. (smile)
Karin Lacy, Lightworker